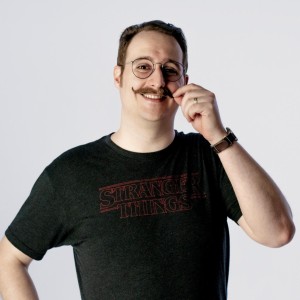 In 2006, David earned a BA in Digital Art from George Mason University (GMU). He used his freshly learned skills in Photoshop to earn a place as an Imaging Specialist at the National Geographic Society headquarters in Washington, D.C. While there, he edited, restored, and archived a host of photographs and documents, including the first magazine they ever made. However, he was best at restoring damaged photographs and making highly accurate reproductions of original works as giclee prints. After a few years, he left the company and moved to Atlanta to study Animation. In 2014, David graduated magna cum laude from the Savannah College of Art and Design (SCAD) at the Atlanta campus with a BFA in Animation and a minor in Technical Direction. Afterward, he worked as a freelance artist and animator until he ran into ECG Productions while working on a 48-hour film project. He was instantly impressed with the company and began a back and forth with them. Soon after he started doing freelance animation work for them, and it wasn't long before he officially joined the ranks in 2016. As a generalist animator, he often wears many hats and regularly works on 2D and 3D animation, camera tracking, motion capture, motion media, and visual effects. He's even worked on-set for several projects as a Production Assistant (PA) and a Visual Effects Supervisor. However, his true passion and specialty lies in 3D animation, 3D modeling, digital lighting, and look development. David uses a variety of different software including Autodesk Maya, Adobe After Effects, RealFlow, Renderman, and SynthEyes, and he is always learning something new. David's blogs tend to focus on animation, visual effects, color, or topical news. But he doesn't just animate, he also does yoga (DDPY), plays and streams video games, and watches movies. His Blu-ray collection is over 500 titles now, and he's been known to collect figurines and toys from my favorite franchises, many of which currently decorate his office. David also has an identical twin brother; just don't ask which is which, he'll never tell.

Animation and Disney belong together, but they’re not the only player in the game. Check out this list of 10 animated, non-Disney films you should watch. There is No Animate Button Your Kids Are Watching Better TV Than You Are

Your kids’ television show choices are way better than yours ever were. Here’s what they should be watching and why. Get the inside scoop on how animators, like our very own David Hixon, create a sense of depth in their 3D animations. Coco vs The Book of Life

Where do you stand on the debate between Coco and The Book of Life? Do you have to pick side when two similar movies come out? We kind of did. The Curious Case of Kevin Spacey

His behavior was rightfully condemned, but his apology was rejected too. Do you agree with our assessment of the curious case of Kevin Spacey? Everything You Know About Color Is (Probably) Wrong

What you know about color probably only applies to painting on paper. If you’re talking video, there’s a good chance you may not have a clue. Make the Most of Mood Lighting

Need to set a certain mood in a scene you’re filming for a video project? Lighting is essential to getting the scene just right. The Where and When of Lighting

Don’t discount how much vital lighting is to making your video pop. This article gives away tips and tricks for lighting in either live action or animation. In video production, everyone knows lighting a live-action scene is essential, but people forget to do the same in animation. We’ve got tips for digital lighting in 2D and 3D. Should Animated Features Have Their Own Academy Award Category?

Buckle up, we’re talking Oscars. Do animated films need their own categoy? If they didn’t, would they be going toe-to-toe with live-action best picture nominees?